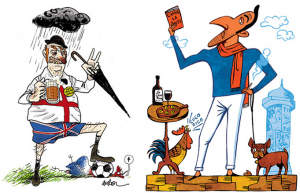 Have you ever felt like you were being stereotyped based on your nationality? We have all heard the stories and jokes about different nationalities behaving differently, but are these stereotypes even true? And why do they exist?

Before we can try to explain why stereotypes exist, let’s look at 4 the most common stereotypes linked with nationalities: American, French, English, and Irish–though there are dozens more we could add to this list!

Do you think these stereotypes are true?

American: Americans take a lot of abuse from Europeans when it comes to stereotypes. They are known for being fat, racist, gun-slinging cowboys who speak very loudly when traveling abroad. There is also a stereotype of being politically conservative and Christian, but also enterprising and hard-working. Americans used to be stereotyped as rich, but over the past decade that image has faded with the economic crisis.

French: The French probably suffer the worst when it comes to age-old stereotypes, and very unflattering ones at that! Known as “garlic-eaters”, the French are rumored to consume the least amount of soap and more perfume than their European counterparts–meaning that they stink! The image of the striped shirt and beret is the typical French lover, who works as little as possible while consuming copious amounts of red wine and seducing women. Politically, the French are seen as cowards, and serve as the punchline for many military jokes.

English: The English, though well-liked, are famous for their terrible cuisine, eccentric lifestyle and crooked teeth! Another stereotype of the English is the rowdy football fans that wreck havoc around stadiums during big matches while consuming loads of beer. English women don’t escape the stereotype either, as they are said to have terrible fashion sense!

Irish: Anywhere you go in the world,  you are sure to find an Irish pub there. The Irish have spread their culture to the four corners of the globe, and have gained a reputation along the way for being angry, drunken brawlers. But the Irish are also known for their kindness, and have a bit of luck and magic on their side. What child hasn’t dreamed on the pot of gold at the end of the rainbow?

The list goes on and on: the Germans are obsessed with punctuality, the Chinese with productivity, the Japanese with academics, and the Canadians are just really friendly people. Other nationalities suffer from deep stereotype prejudices such as countries in Africa or India.

But is there any truth to these common stereotypes?

And if not, how did they even come to exist in the first place?

According to research, humans invent stereotypes through a natural thought process. The first part of the process is simply categorizing people and things into different groups according to their likeness or differences. But human nature and ethnocentrism (the view of things in which one’s own group is the center of everything) come into play, and we start to think of ourselves as somehow better than those who are different than us. Stereotyping is therefore a negative effect of the process of categorizing, focusing on our own culture, and being prejudiced. In this way we can see that stereotyping is not based on a realistic view of a culture, but one that is based on assumptions and lack of knowledge.

Do you think stereotypes are necessarily negative? Can stereotypes be positive? Why or why not?

What is your nationality stereotype? Does it describe you or your family?

Have you been the victim of negative stereotyping? 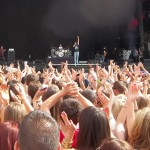